One of the things that caught my attention in the WWDC videos I watched last week were the improvements in the notification system, meant to on one hand give more control over notifications to the users and make them a bit less overwhelming, and on the other hand make them more useful by allowing them to be more interactive.

I’ve tried to sum up here all the changes related to notifications that I’ve found – there’s nothing here that you can’t find by yourself in the videos, but I figured it’s worth putting it all in one place in a concise form.

Most of the below applies to both iOS 12 and watchOS 5. 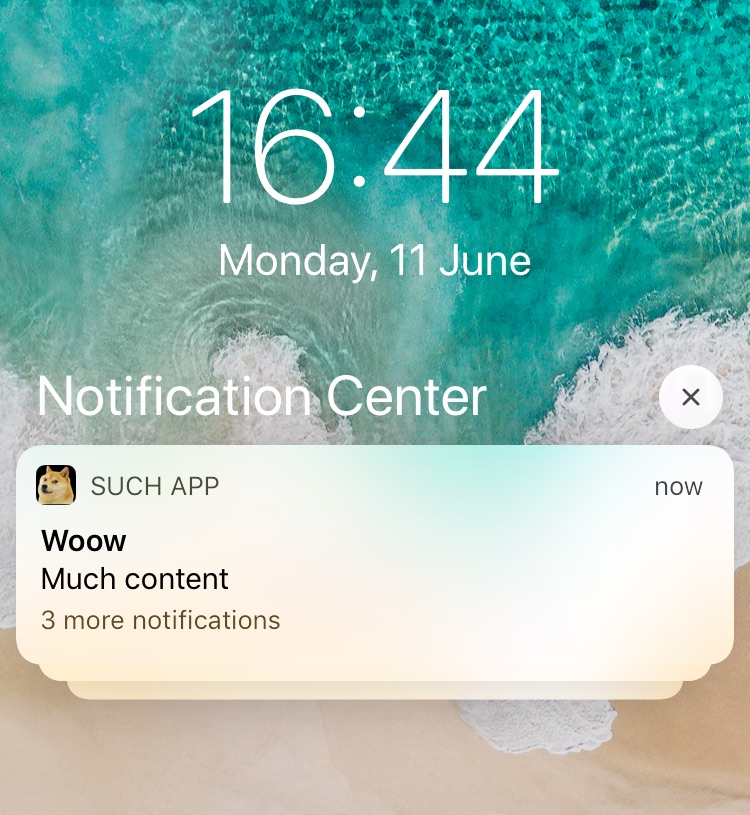 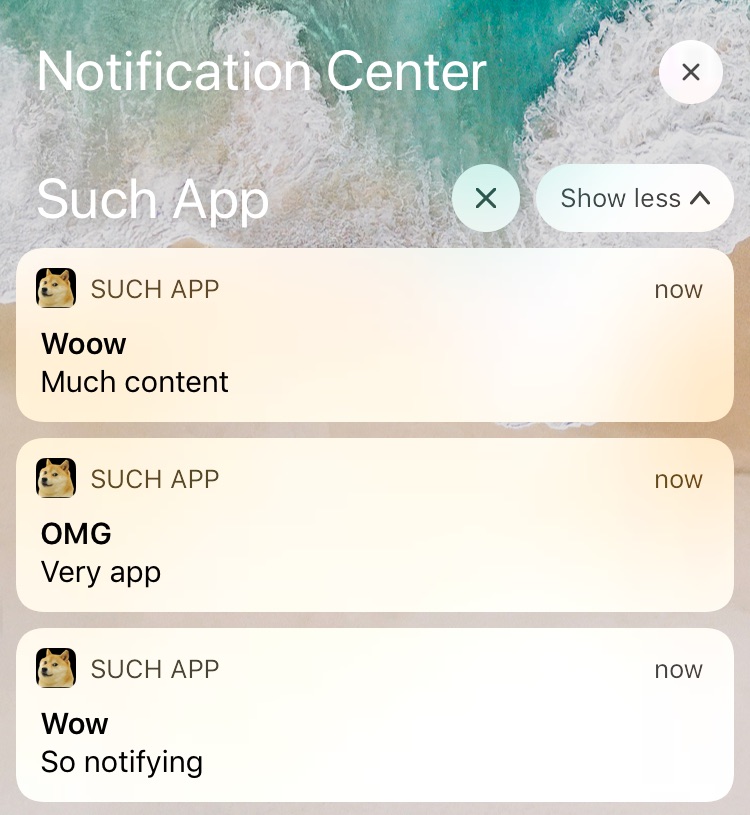 By default, notifications will be grouped by app – which means all notifications from your app will be packed into one stack, showing only the newest one (called “leading” in the videos) in detail, with a small subtitle like “5 more notifications” below. This can make sense for a lot of apps, if they don’t have any concept of threads/conversations or any other way of dividing notifications into distinct groups. But if your app does, you can customize this.

To override the default grouping, you can assign specific notifications their “thread IDs”. You might already be doing this, since it’s not a new feature – this was added last year in order to let you group notifications with hidden content on a locked device’s lock screen. The whole grouping API added now is really just an extension of that system from iOS 11, so if you’ve implemented hidden previews, this works in a very similar way.

So if you do assign a thread ID, all notifications for a given thread will be grouped together, but separately from other threads. Some examples of how this might be used showed in the video:

Respect the user’s priorities and organization

Also, take into account that the user can override this to still put all your notifications into one group, or to not group them at all. And you probably shouldn’t try to abuse this system to put every notification in a new thread just because…

One thing you can further customize is the summary below grouped content. By default, it says “x more notifications”, but you can change it to say e.g. “5 more messages” or “8 more episodes”. You do this by defining a UNNotificationCategory (you need to have one) and passing a format string like "%u more messages from %@" to the categorySummaryFormat argument. Two forms are allowed: either with one %u, or with one %u and one %@. 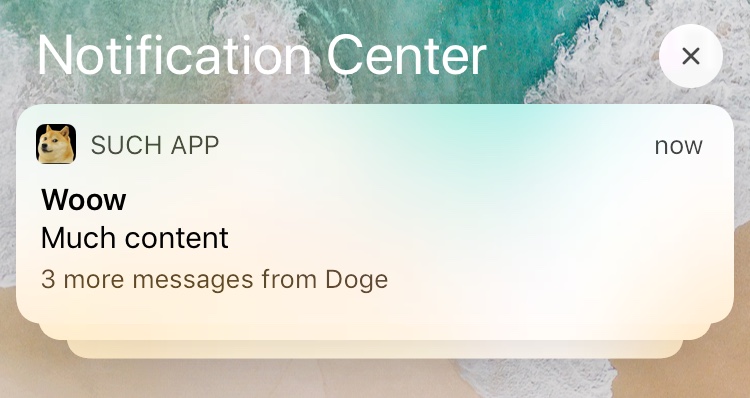 iOS tries to combine these summaries when possible:

And of course you should probably think about localizing all of this to multiple languages… In this case, look into NSString’s method localizedUserNotificationString(forKey:arguments:), introduced two years ago with UserNotifications, and the stringsdict file format used for defining localized labels with different variants of plurals.

The user can switch an app’s notifications into quiet mode in a few ways:

All of these lead to the panel shown below, in which the user can either turn off given app’s notifications completely, or switch them to the quiet mode:

From what I can see, this seems to simply turn off the “Lock Screen” and “Banners” options in the notification settings, so the user can switch it back at any point if they want to: 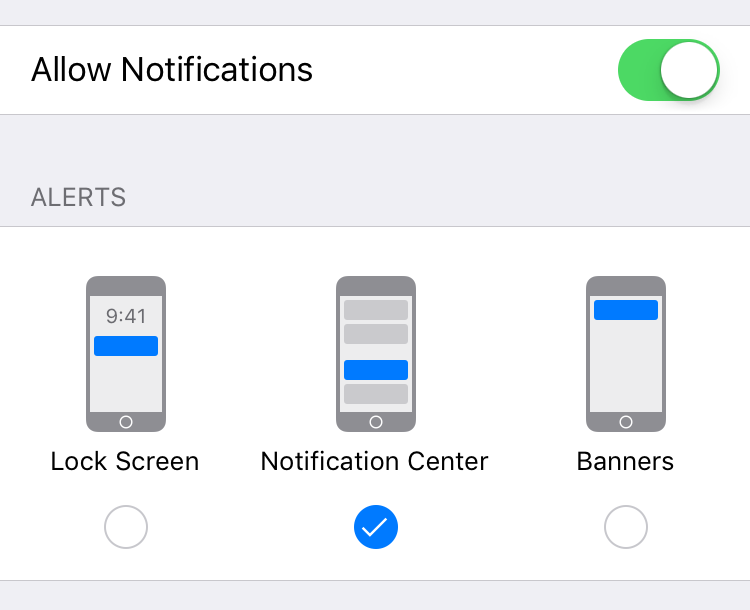 They can also access the same “Manage” panel when notifications are set to quiet, in which case they have an option to “Deliver Prominently” instead.

If you think this kind of notification delivery is enough for your app, you can start in the quiet mode from the beginning – and as a bonus, you don’t have to ask the user for permission to deliver notifications at all (!). This is meant as a kind of “trial” mode of notifications, that this way the user can see if your notifications are worth seeing, but they don’t have to agree to let you fill their lock screen with them before they see what you’re actually going to send them.

If you want to take this path, pass the .provisional key when calling requestAuthorization(), and the permission popup should not appear:

For some apps, it might make sense to only disable some kinds of notifications and leave others – kind of like most social networks let you customize which kinds of notification emails you want to receive from them. So Apple has added another feature in the API, which is meant to give you a chance to “save” your app from having its notifications turned off completely.

The way it’s done is that you implement a userNotificationCenter:openSettingsFor: callback in your app, and when it’s called, you show a screen inside your app that lets the user tweak which notifications to receive, where they can turn on and off specific categories of available notifications. You also need to pass an additional key .providesAppNotificationSettings when calling requestAuthorization() (I don’t think this was mentioned, but it doesn’t seem to work without that).

If you implement this, a link to this screen will be shown in two places in the system: 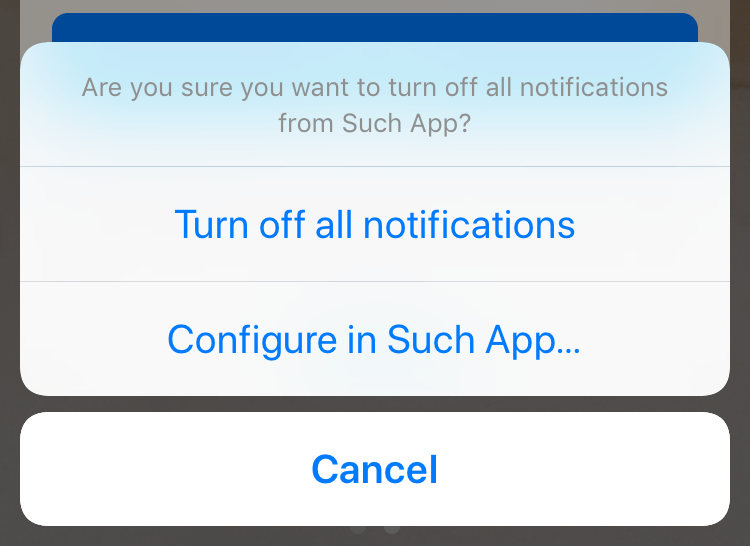 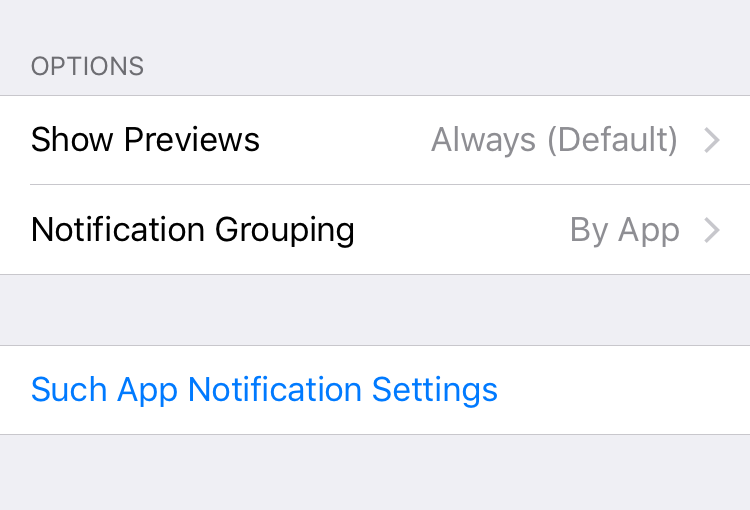 The UserNotificationsUI API has also been updated to allow a lot more interactivity in the Notification Content Extension. There are two main changes here:

The first one is that the list of action buttons presented below the content doesn’t have to be static anymore. Previously you had to define a list of buttons for each category of notifications when defining UNNotificationCategory and passing a list of them to UNUserNotificationCenter’s setNotificationCategories. However, once you got to the extension view, it would always display what was configured earlier in the main app.

Now, inside the extension you can set the NSExtensionContext’s notificationActions property to update the list of action buttons. This can be done when the view appears, to make the selection of buttons depend on what kind of notification is received, or in reaction to the user’s interaction with the view (example: replace a “Like” button with “Unlike” after the user performs a like action).

The second change is that the content area itself can now accept user interaction. You need to opt in to this by setting a UNNotificationExtensionUserInteractionEnabled property under NSExtensionAttributes in your Info.plist. This lets you render whatever you want in that content box, some kind of custom UI with buttons that the user might tap etc.

You also have two new methods available on NSExtensionContext that you might want to call from your custom content UI:

While most of the work this year went into basically fighting back against the deluge of notifications and letting users see less of them, Apple has realized that this could have unintended bad consequences in some rare scenarios. There are some kinds of notifications that you normally get rarely, if ever, but when you do get them, it’s really, really important that you do not miss them, and ideally see them immediately. The example given was a notification about blood glucose level for a diabetic person.

So apart from limiting users' exposure to notifications, Apple is adding one special kind of notification that goes the other way: it ignores your Do Not Disturb settings, and it even ignores the physical mute switch in your iPhone (!).

Such notification is displayed on the lock screen with a special red warning icon, and it not only can, but (if I understand correctly) has to include a sound – either a default sound for critical alerts (not sure what that is, but probably something you don’t want to play at 2am by accident), or one selected by you.

In order to send such notification, you need to ask for notifications permission with an additional .criticalAlert key:

The user will get a special kind of permission popup with a red alert icon, explaining what critical alerts are. They of course have a right to refuse granting this permission, and they can also take it back later at any moment.

To actually send a critical alert, you send a notification as usual, except:

You can also override the notification volume that the user has set in their settings (in the range from 0 to 1):

Of course this feature is something that some developers would want to abuse, so to be able to send these critical alerts, your apps needs to include a special custom entitlement that you will only get from Apple on request. You need to apply through this form and explain what kind of app your building and what you need critical alerts for. And you probably need to have a really good reason to convince them.

The kinds of apps that Apple mentioned this feature might make sense for are for example:

In general, this should be something that requires the user to take some kind of action immediately (in real life), where otherwise their or others' health or life might be at risk if they don’t.

All of the above is also available on watchOS, specifically:

As far as I can tell, macOS didn’t get any of the above features – but they’re probably not needed as much there. However, it did finally get access to the UserNotifications framework itself which for some reason it didn’t get 2 years ago, unlike every other Apple platform. This means you now get access to a more modern API that unifies handling of local and remote notifications and adds various features known from the iOS version.

Hi! Great blog post! Wondering if you could help answer a question with regard to provisional authorization. Let's say a user on my app is on iOS 11, and is currently opted out of (turned off) notifications. Then, in my next app release I add support for provisional authorization. When that user upgrades to iOS 12 (and I guess updates my app), will I then be able to automatically start sending them quiet notifications? Will the notification settings automatically change to on + quiet? Or will their opted-out setting be kept? It's been hard to find an answer to this short of actually testing it out. Thanks!

@Chris: huh, good question... but I guess you'll have to ask someone to test it. But my common sense thinking would be that if someone was asked about notifications permission and said no, or went to the settings later and disabled them manually, then that's a way of explicitly saying "no, I don't want notifications from this app", so this setting should be unchanged after the update and you still wouldn't be able to send notifications.

As I understand, provisional notifications are a way for the user to see if your app's notifications are interesting before they decide if they want to allow them on their lock screen etc., but in this case it seems they've already made a decision, for whatever reason.