I’ve read a lot about good programming practices recently. I’ve read the “Pragmatic programmer” book (which is awesome, one of the most useful books I have read, seriously); I’ve watched a great presentation “Craftsmanship and ethics” by Robert C. Cooper. And it seems that everyone seems to emphasize that one thing that is extremely important to write good software is writing unit tests (and writing them “all the fucking time”, as that black dude said in that presentation ;). I must admit I still haven’t had the courage to switch to TDD (although I try it for single tasks from time to time), and my test coverage is nowhere near what it should be ― it ranges from 20% to 80% depending on the project and its layer. But I know it’s important and I’m working on it…

Anyway, one day I had a thought: even if I test all models and controllers thoroughly, am I not leaving something out? Didn’t I forget about something that is a quite important part of the application ― about my JavaScript code? After all, it’s code too, right? And sometimes it’s very important code; and not having any tests for it means the code is very fragile, it’s easy to break things, already fixed bugs may reappear again, and so on. Of course, JavaScript may be harder to test, because it’s sometimes very closely coupled to HTML, but at least some part of it could surely be tested.

But how do you unit test JavaScript?… I had no idea how to do this.

So I started googling, and I found that there are plenty of different unit test frameworks for JavaScript. Of course I couldn’t resist and I had to take a look at every single one and compare them to choose the best one :) (I heard that it’s called “maximiser” and that it’s bad…). The result of this looking is the list below.

The testing libraries can be divided into a few categories. First, there are two main kinds of syntax: most of the libraries use either the classic “assert” style inherited from JUnit (assertTrue(), assertEquals() and so on), or an RSpec-style syntax (using terms like “describe”, “it should” etc.). Since RSpec is my favourite test framework for Ruby code, I liked the second type more.

Also, tests can either be run in a browser, or from command-line, in a JavaScript engine that imitates the browser (mainly Rhino). Both option have their advantages: if you run tests in a browser, you’re testing your code in the real environment; the result reports also usually look better (maybe I’m weird, but if I’m going to look at something many times a day, I’d rather it looked good…). If you run tests from a console, you may not be able to test all the browser’s features, but it’s much easier to run tests automatically, e.g. on a CI server (since a CI server may not have a monitor attached to it, so it may not be able to run a browser at all…).

Update (2.04.2011): Things have changed a bit since then. Blue Ridge is officially not maintained anymore. There is however a new library called Jasmine, which is really good, uses RSpec style of writing tests, has support for mocks and a gem for Ruby/Rails integration.

Here are the libraries which I liked most:

I’ll start with the winner, i.e. the one which I’m now using in my current project. The syntax looks very RSpec-like:

Of course it looks a bit more messy than in Ruby, because you have to use function() {} instead of do … end, but it’s good enough. And I don’t really have to type all that manually, because there is a Textmate bundle which makes it a lot easier. Screw.Unit also has such things as nested describe blocks, before and after functions in each describe, and there’s about 10 different matchers apart from equal that you can use (and you can add new ones easily).

But I didn’t get to the best part yet. The best part is a Rails plugin, previously known as javascript_testing, recently renamed to Blue Ridge. It combines several things together:

The result of all this is that you can easily write JavaScript unit tests, using mocks and stubs, and run them BOTH in a browser and on your CI server ― an ideal solution :) The only problem is that the Rhino/env.js engine doesn’t imitate the browser 100% correctly ― there are many bugs and some things are very hard to achieve (e.g. calculating offsets and sizes of elements), but env.js is under active development and things are getting better.

(Note: of course, you could integrate any of the in-browser test libraries with Rhino and env.js the same way it was done with Screw.Unit; but here it’s already done for you, so why bother?…) 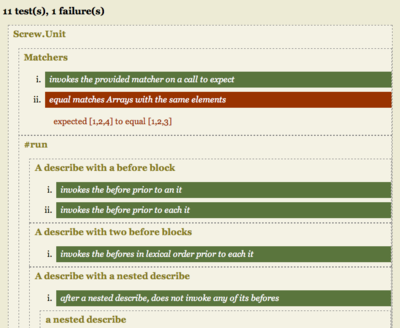 This one is very different from the rest. What’s so special about it is that it uses a syntax that is not completely correct JavaScript. It uses some kind of preprocessor that first converts the tests to proper JavaScript, and then executes them. Thanks to that, the code looks more Ruby-like than in any other library:

That’s right, no semicolons at the end, and no need for wrapping arguments in parentheses. I suspect that some JavaScript gurus would feel offended by this, and would say that it makes no sense to “fix” JavaScript by changing it into something it is not; I kind of like this syntax… Also, it has a Textmate bundle too, includes no end of matchers, and the results look just awesome:

The only reason I didn’t choose it is because the CI support was a requirement (client requested it), and I didn’t have time to try to make it work with env.js.

It’s also known to be able to run in Rhino. The Blue Ridge plugin has even included JSSpec previously, but later it switched to Screw.Unit, so I chose the latter…

This is a member of the assert-style family. It’s based on the unittest library, which is a part of Scriptaculous and requires Prototype to run. jsUnitTest is a version of unittest that had all Prototype calls stripped from it and is now framework-independent. Tests run inside a browser. The code looks like this:

And it can look like this if you install an additional library, jShoulda:

I think this is what I would choose if I liked the “assertEqual” style of assertions; but as I said, I don’t ;)

jqUnit, as you can guess from the name, is not framework-independent, it’s built on top of jQuery (which is not a problem for me… :) It’s one of those libraries which have a syntax that’s neither RSpec- nor JUnit-like. It runs inside a browser. Here’s how a test looks in jqUnit:

Just for completeness, here’s the rest of the libraries, with short descriptions:

When you’re writing tests, it’s sometimes good to be able to override some methods in other objects, to test the tested object in isolation; in JavaScript, this is a lot easier than even in Ruby, but a nice library can help anyway. I found several of them, and they all have comparable features and syntax. I could recommend almost any of them, it’s mostly a matter of taste ― I’m using Smoke because that’s what is integrated with Blue Ridge.

Here are the options, with code samples:

This one is actually a bit different. It says on the website that it’s a “spying” library, not a mocking library. The difference is that instead of specifying up front what will happen, you make the mock record what kinds of methods are called on it, and AFTER the execution you verify if it was called properly. I’m not really sure this is a better way of doing this…

Great reviews! Hope you have a chance to checkout JSpec 2.0, I have made several fantastic additions since the release in this article :)

I looked at it now, but I must admit it’s still not as convenient to use as blue-ridge… and as far as I understand, you can set it up to run either in Rhino or in a browser, but there’s no easy way to make it run in both.

Great review! I'd like to know your thoughts about JavaScriptMVC 2.0's test suite. I've combined our test framework (very much JUnit style) with Env (I'm a contributor) and Selenium.

It's like the Blue ridge plugin in that unit tests can run in rhino and the browser. But, your functional tests (things like clicking and typing) will also run automatically.

Here's a url, http://javascriptmvc.com/#&who=jQuery.Test , but I am working on a screencast that should be out tomorrow.

JavascriptMVC looks awesome! I wish I'd found it earlier - now it would be too much work to switch to it. But I'll try it out when I start a new project.

I have added mocking capabilities to JSpec's core now, could go on your list :)