I read Apple’s tutorial about Interface Builder this week. Most parts of it told about rather basic things and were quite boring, but I’ve learned several useful tricks from it. IB, like most of Apple’s applications, has lots of hidden features which aren’t obvious at first, and can only be found by experimenting, by accident or by reading about them somewhere. Here’s a few things that I’ve learned from the tutorial – some of them are such hidden features, some are just things that weren’t mentioned in any source I’d read before.

That’s all – I hope this will be useful for somebody…

1) In case you wonder what does “HUD panel” mean – it’s a name used for all those small grey translucent panels, used in IB, iPhoto and other iApps; it’s an acronym for Heads-up display. This is a HUD panel from Quicktime: 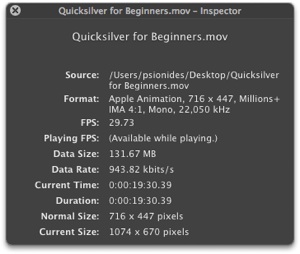