Yesterday while I was working in the terminal I noticed something unusual about the results of “ls -al” command: 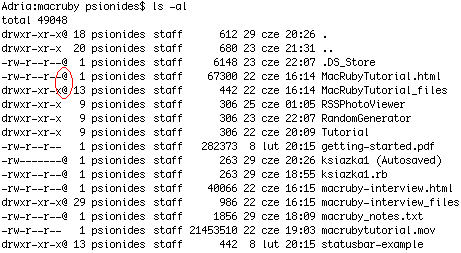 What are those symbols? I googled for “mac ls at sign”, but most of the results told me that “@” means “symbolic link”. Well, all those files can’t be symbolic links, I’m pretty sure of that. So what are they?

I found the answer in a mail on Apple mailing list. It seems that the @ symbol means that the file has something called “extended attributes”. The attributes are a kind of metadata about the file stored in a special place in the HFS filesystem, not visible during normal browsing. As I learned from a Wikipedia page, most of popular filesystems support such metadata – although I’ve never heard such thing existed in Windows or Linux… The mail also said that apart from “@”, files can have “+” symbol, which means that they have non-standard permissions set using some kind of ACLs.

The mail explained that you can print that metadata by adding a –@ option to ls. I did that, and learned that some of the files had an attribute “com.apple.TextEncoding”, and some others – “com.apple.quarantine”. It’s easy to guess what TextEncoding is for, but quarantine? WTF?

There is a command line utility for accessing and managing that metadata, named xattr. It can print file’s metadata attributes and their values, modify attributes and remove them, like this:

As you can see, the metadata store not only the information that a file was downloaded from the Internet, but also how it was downloaded (using Firefox), and I think also when it was downloaded (the hex value). The -d option can be useful if MacOSX for some reason forgets to remove the quarantine attribute, which – as I’ve read – can happen sometimes.

Nice synopsis. I was looking for just this information.

This was exactly what I was looking for. I've been hunting down this info for hours now....ehg.

Yes! Thanks so much - I've also been looking for this for a couple of hours!

Me too! Thanks a lot.

Thx, got it and remove it by line below；

That was really help Jakub. It enlightened me.

Great summary. Thanks a bunch.